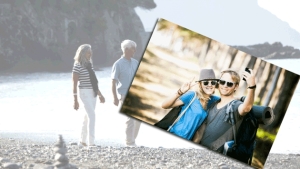 For the past 10 years, the travel industry was focused on Baby Boomers, who were considered the most lucrative market. As Boomers got older, it was assumed, they would have more time and more money to travel.

That certainly has been the case over the last decade, and boomers continue to be a major market for travel. But now the industry may want to refocus on the often forgotten Millennial or Gen Y traveler, at least according to the 2014 Portrait of American Travelers, an annual survey by MMGY Global, a travel marketing services firm.

According to the survey, Millennials those between the ages of 18 and 35 will be the driving force behind the continued recovery of the U.S. travel industry. They are also expected to spend incrementally more on travel services than any other age group over the next 12 months.

According the MMGY Global, both trends are consistent with the manner in which Millennials view the sanctity of their vacation time. Last year they took an average of 4.6 overnight trips for leisure purposes versus an average of 4.2 trips for all U.S. households with an annual income over $50,000.

“Six in 10 Millennials would rather spend their money on experiences than material things,” said Steve Cohen, vice president of insights for MMGY Global. “This is presumably one of the reasons we’ve observed the spike in their intentions with respect to leisure travel in the year ahead…Millennials’ planning, booking and sharing habits are significantly different from those of older leisure travelers.”

All this could be good for travel agents. In an earlier survey for the American Society of Travel Agents on the value of using a travel agent, MMGY Global found nearly 60 percent of Millennials who used travel agents believed that their vacations were better than those organized without their assistance. The study also found that consumers that use an agent travel more average 4.7 trips than consumers that don’t use a travel agent average 3.6 trips.

On the other hand, Millennials’ travel interests don’t always extend to more distant destinations. Gen Yers are more likely to have taken a “staycation” during the last 12 months than all other travelers. Thirty-three percent took at least one vacation within 50 miles of their home, versus 27 percent among all other leisure travelers. One third said their choice was made to save money to take a more substantial vacation during the year ahead.

The MMGY Portrait of American Travelers, now in its 24th year, reflects the lifestyles and travel behavior of approximately 57 million American households who spent an average of $4,429 on leisure travel in the last year. Collectively, they represent nearly $240 billion in U.S. travel spending. The survey polls 2,550 active leisure travelers who reside in households with an annual income of $50,000 or more and who have taken at least one leisure trip of 75 miles or more from home during the previous 12 months on which they used overnight accommodations.

Sabre Corporation, the leading technology provider to the global travel and tourism industry, has renewed its technology agreement with Accor Hotels to continue marketing and selling Accor’s room inventory and rates in the Sabre global distribution system.Travel agents using the Sabre global travel marketplace will be able to access room rates and availability for all 13 Accor brands and 3,600 hotels in 92 countries.Based on Sabre’s unparalleled access to more than 400,000 travel agents worldwide, Accor also will extend its advertising program within the Sabre travel marketplace.

“Innovative hoteliers like Accor are constantly evaluating ways to most effectively reach travel agents and travelers,” said Carlo Olejniczak, senior vice president, Global Sales for Accor.  “The Sabre travel marketplace is an important part of our sales and distribution strategy, and Sabre has consistently delivered value and creative ideas to help accelerate our growth.”David Gross, senior vice president of Supplier Commerce at Sabre, said: “Accor hotels’ brands are constantly reinventing their concept to satisfy the needs and expectations of business and leisure customers alike, and Sabre is proud to showcase Accor’s content in the Sabre travel marketplace.

“Sabre® is a leading technology provider to the global travel and tourism industry. Sabre’s software, data, mobile and distribution solutions are used by hundreds of airlines and thousands of hotel properties to manage critical operations, such as passenger and guest reservations, revenue management, and flight, network and crew management. Sabre also operates a leading global travel marketplace, processing over $100 billion of estimated travel spend in 2013 by connecting travel suppliers to their most valued customers, the business traveler.  Headquartered in Southlake, Texas, USA, Sabre operates offices in approximately 60 countries around the world.

Facebook’s Erik Hawkins talks about the growth in mobile technology and how Facebook is capitalizing on that. Evan Reece, center, CEO of Liftopia, and Dan Sherman, vice president of marketing for Ski.com, moderate the question-and-answer session at Sunday’s Mountain Travel Symposium forum.

But something has happened since then, both with the company and with digital consumption as a whole, that is turning Facebook into a mega-marketing machine.

Hawkins told hundreds of Symposium attendees Sunday that Facebook saw a 90 percent increase in time spent on its mobile application last year — 90 percent in one year.

“The internet is shifting to mobile,” he said, adding that the travel industry is the No. 1 thing people engage in while on Facebook.

With 60 percent of Facebook’s total activity coming from mobile devices, there’s an opportunity to target advertising like never before.

“We all look at Facebook from two lenses — user and marketer,” Hawkins told Evan Reece, co-founder and CEO of Liftopia, during a question and answer session at the first day of the conference’s forum presentations.

“Our lens as a marketer, traditionally we see Facebook as a place where we make connections and we have an audience and we have to publish to it. What it’s become is really, really, highly efficient, highly targeted media platform. What I don’t think everyone has done yet is reconciled that it can be both things,” Hawkins said.

Data shows that Facebook is an undeniably effective advertising tool, especially for the travel industry, but Ski.com’s Vice President of Marketing Dan Sherman wanted to know just how much companies should spend on Facebook as a percentage of total digital spend.

“I think people should spend as much as is effective,” Hawkins said. “Are you spending and are you seeing results? Then you should probably keep spending.”

But at the local level, marketers and tourism industry professionals don’t always agree that digital advertising is always the best way to reach customers. At a discussion about visitor services Saturday, Aspen Chamber Resort Association President and CEO Debbie Braun said Facebook is great and so are sites like Yelp, where customers post reviews of their experiences.

“But the 60-year-old walking in (to the visitor’s center) has a visitor’s guide in his back pocket,” Braun said. “You can’t be a one-trip pony.”

That’s why so many mountain travel destinations like Aspen still invest and believe in bricks-and-mortar efforts like visitors centers. However, digital technology is a way to augment all of those other efforts, said Douglas Ralston, of the mobile marketing company mobiManage.

“Digital is part of it,” he said. “There’s nothing you can take away from that personal touch.”

Facebook is a key digital marketing tool, but it also has its challenges, Jackson Hole Chief Marketing Officer Adam Sutner said after the forum. Facebook’s ability to segment markets is “top notch,” but some of the strengths Hawkins mentioned are perceived as potential weaknesses by marketers as the platform evolves.

“What marketers worry about, I think, is that as Facebook continues to grow, its constituent brands’ content become increasingly diluted and much more difficult for us, the brands, to get our own content viewed,” Sutner said. “Facebook, of course, likes this as their business model includes growing their advertising business. So the old virtuous reasons for marketers to want to lean into Facebook, forming an engaged relationship with a passionate set of like-minded fans in and around your brand experience, is perversely diminishing. Seeing that scenario all the way through, Facebook would just become another media vehicle, subject to (cost-per-thousand) and other (return-on-investment) scrutiny.”

“Ninety-nine percent (of the Facebook users who engage in travel on the site, which is nearly half of all users) share something on Facebook when they get back from a vacation,” Hawkins said. “Thirty-two percent do it before they even get home from the airport. That sparks the next set of dreamers to think about a vacation.”

via Mountain Travel Symposium: Facebook as an ad platform | AspenTimes.com.

New York – On Tuesday, Bloomberg released a report that Google (NASDAQ:GOOG) has reached an agreement with Room 77 to license that company’s hotel booking software.  Room 77 is a start-up that has been funded by Expedia (Nasdaq:EXPE).  The licensing deal marks Google’s intention to re-enter the online travel market after a stop-start attempts in the past, including the introduction of Hotel Price Ads (HPA) in 2010, the acquisition of ITA Software in 2011, and the launch of Hotel Finder the same year.

Along with Expedia, the online travel market is currently dominated by Priceline (NASDAQ:PCLN), Orbitz Worldwide (NYSE:WWW), and TripAdvisor (NASDAQ:TRIP).  According to the ITB World Travel Trends report published last December, online travel booking now accounts for almost 70 percent of all booking and mobile bookings is one to the fastest growing segments overall.  In the United States alone, the industry is worth more than $ 300 billion and given the recent performance of many of the companies in the sector there is still room for growth.

According to analysts the licensing deal by Google is most likely an attempt to upgrade their HPA, which essentially operates as the equivalent of ITA, a proprietary airline booking software.  Whilst HPA is aimed at hotel marketers, the software would essentially allow Google to complete the loop, by facilitating the customer booking.  If this is the case, Google would be positioning itself to cut the middlemen, such as Priceline and Expedia, while providing hotels with a better return on investment when compared to typical paid search campaigns.

Furthermore, industry analysts believe the move was driven by the Department of Justice’s ruling that allowed Google to acquire ITA Software on several conditions, including Google must allow licensed competitors to continue using the software, Google must take measures to prevent snooping, and the company must continue to maintain the software for licensees.

Through the licensing deal, it could be expected that Google might make more forays into the industry as their ‘competitors’ have little if any choice but to continue advertising through Google. While there is little direct evidence to suggest that such a move would hurt Priceline, Expedia, and TripAdvisor, almost 90 percent of what they spend on marketing goes to Google.  As such, the increased emphasis on travel could dramatically alter the online travel market in the long-run.  Shares in Google were up $ 4.10 in pre-market trading on Wednesday morning.