During December 2015, IdeaWorksCompany made flight bookings on the following airlines:  Aer Lingus, AirAsia, easyJet, Ryanair, Spirit, and Vueling.  This list of airlines might look familiar to those acquainted with the annual CarTrawler Yearbook of Ancillary Revenue by IdeaWorksCompany.  These airlines are top ancillary revenue producers and a review of their methods should provide lessons for how to boost a la carte sales:

In addition to the above, hotel and car hire bookings, checked bags, and assigned seating were the most frequently promoted items in post-booking emails sent by the airlines.

“Never Say Goodbye; Savvy Airlines Use Email to Sell After Booking” was released today as a free 15-page report available at the IdeaWorksCompany website.  The 2016 Ancillary Revenue Report series is sponsored by CarTrawler.  Click here to access the full report:  www.ideaworkscompany.com/category/current-reports 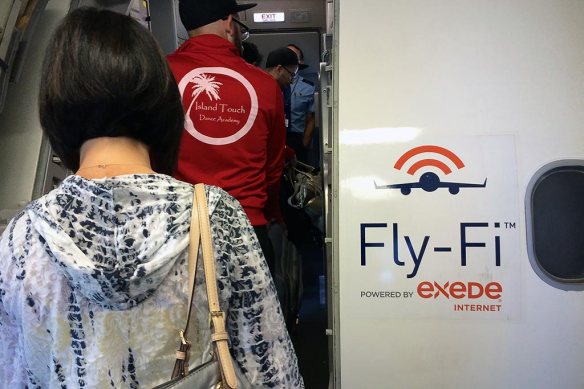 An annual report from Routehappy reveals that in-flight Internet is a rapidly growing commodity among global airlines and that across adoption, American carriers are leading the way.

60 carriers around the world now offer in flight Internet, up from 52 last year.  As a result, passengers can expect to find connectivity on about 36% of miles flown around the globe.

Higher quality internet connections are also on the rise according to Jason Rabinowitz, Routehappy’s data manager.

That adoption of higher speed internet should further improve though 2016 as a new batch communication technology reaches the market. Gogo’s 2KU service, launched last year, provides transfer speeds of up to 70 Mb/s and is currently being installed across numerous aircraft and carriers. Inmarsat, a largely European solution, is also now coming online.

In terms of general Wi-Fi adoption, the report also found that American carriers seem to be leading the rest of the world, no doubt driven by the ultra-connected user base. Delta, United, and American Airlines (in that order) lead the world in airline seat miles with Wi-Fi capable aircraft, while carriers like Virgin America have their entire fleets outfitted with internet capability.

For passengers flying long haul routes, however, the legacy U.S. carriers aren’t necessarily the best bet. Emirates, which outfits many of its long haul routes on Wi-Fi equipped jumbo jets operates nearly double the number of miles that the next carrier does, while Lufthansa has 100% of its long haul fleet equipped with service. The best legacy carrier for inflight Wi-Fi was measured to be United Airlines.

Routehappy’s full dataset can be found over on its site.

Below is an infographic with the highlights.

The 2015 CarTrawler Yearbook of Ancillary Revenue by IdeaWorksCompany, now available free online, provides the most detailed global assessment of a bottom-line-booster that can represent 38.7% of a carrier’s revenue, as it does for Spirit Airlines in the US, or $56.28 per passenger for Jet2.com in the UK, and $5.86 billion for global behemoth United Airlines.

This excellent full 98-page report examines 63 airlines that disclosed revenue in financial filings during 2014 from sources such as frequent flier miles sold to partners, fees for checked bags, and commissions from car rentals.

Click the links below to read the 6-page press release or to view the entire 98-page yearbook.