If Adobe’s name still brings to mind design software like Photoshop and InDesign, the company wants you to think again. Thousands of companies, including two-thirds of Fortune 50 companies, are using one of its three main cloud computing businesses, the Adobe Marketing Cloud, to help handle more than 30 trillion transactions a year. Many of those companies are travel brands, from small budget airlines, such as Eurowings, to large hotel chains, like the MGM Grand in Las Vegas.Adobe has been warming to the travel and hospitality sector.

In late 2014, it created a specific group to focus on it and put Mohammad Gaber in charge. In the past year, the company has roughly grown its travel and hospitality by about half, Gaber said in an interview.

The big-spending airline will tap Adobe’s digital marketing capabilities across direct sales, loyalty, social media and other areas of its businesses, such as cargo. 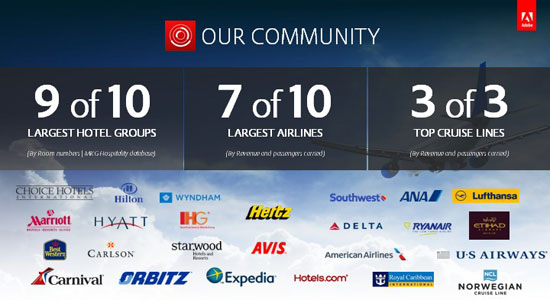 Gaber said that travel marketing departments are failing to capture full value today. There is a lot of talk of personalization, but many businesses aren’t laying the foundations of data, assets, and delivery needed for success. He added:

“The ability to create, manage, and deliver text, images, and video is often overlooked, as is the proper integration and process change management needed.”Gaber said an ideal scenario for implementing a personalization program is to bring together a coordinated team that has people from various siloed parts of the marketing business, such as a data analyst, an IT expert, a creative professional, sales rep, and the marketers.

A coordinated effort is needed to have as much of a 360-degree look at information as possible. He said marketers shouldn’t be afraid of the “geek speak” of the tech guys and the data analysts. Based on his conversations with clients, Gaber’s vision of where travel marketing is headed emphasizes personalized, chat-style interactions with customers. Eventually travel brands may get to a point where, after a customer books a trip, they’ll be following up on customer service and up-sells via a text-messaging-style platform like Facebook Messenger or WhatsApp. 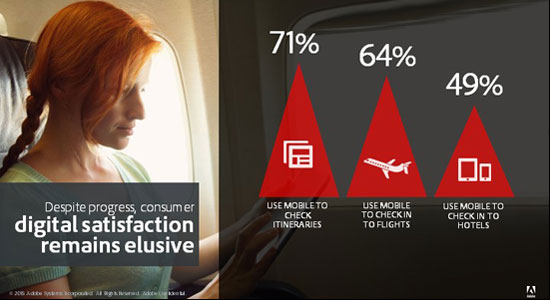 To anticipate the open-ended direction of marketing, Adobe’s goal is to have an “open” platform. Some industry critics say that that effort remains a work-in-progress. Gaber responded by mentioning several examples of Adobe’s tools “playing nicely” with third-party systems. He said that its behavioural analytics tool integrates well with many content management systems. To provide localization, Adobe also synchs up with major digital translation vendors via an open API, with server-to-server integration.

Source: Adobe boosts its travel marketing business by about 50% in a year – Tnooz