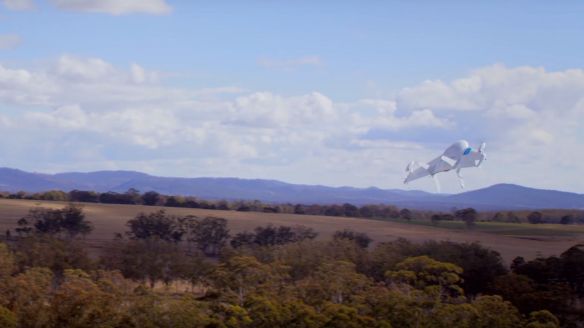 Google’s Project Wing is the code name for the company’s drone delivery service it hopes to launch in 2017. The company first publicly announced Project Wing in a YouTube video back in 2014, but since then has been keeping mum about how this service will work. Now a new patent filing from the company reveals how part of Project Wing deliveries could deliver your packages.

Presumably once the mobile delivery receptacle delivers the package to a secure location, a customer can choose to pick it up there or it is then delivered by local ground transportation to a customer’s address.

The patent filing is the first concrete example of how Google intends to get packages from warehouse to customers and its granting comes just weeks after Dave Vos, the head of Google’s Project Wing said 2017 is still a realistic date for drone deliveries to begin as long as regulatory hurdles can be overcome.

But if drone deliveries do start next year, Google won’t be entering the field alone. Commerce giant Amazon is working on its own drone delivery service, Prime Air, which promises to deliver packages by air in just 30 minutes.

So in the future when on holiday in the Australian outback or on Safari in Africa, or on a remote Maldivian island this is how you might be re-supplied!

Source: This is How Google’s Project Wing Drone Delivery Service Could Work