Here is a selection of some of the finest digital marketing stats we’ve seen this week.

It includes the online travel sector, digital in Southeast Asia, email marketing, Pinterest, real-time video, and conversion rates from across the UK.

And for more of the same, download Econsultancy’s Internet Marketing Statistics Compendium…

A consumer survey by Webcredible found that 85% of people prefer to book their holiday online.

However it also shows that many travel sites still aren’t catering correctly for their customers, with 69% of respondents stating that they find it difficult to compare options and results, while a third (31%) feel they aren’t given enough information about their destination.

The report also examined the overall user experience offered by various travel operators, with Airbnb found to be out performing its more established rivals.

Southeast Asia could be the next big ecommerce opportunity

A new report by Econsultancy and Hybris has found that a majority of companies in the Southeast-Asia are planning to increase their level of investment in ecommerce technology over the next 12 months.

Fewer than one-third will maintain the same budget or decrease their investment, though it’s important to note that the base size for this question is quite low.

Are you/your clients planning to increase your/their investment in ecommerce technology during the next 12 months? 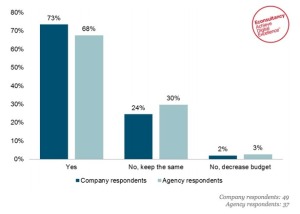 The average digital agency daily rate has increased by 6% in the past two years, according to a new survey by Econsultancy.

Smaller agencies (with projected turnover of less than £1m) reported the most significant increases with rates up 8% since 2012.

In contrast respondents with a turnover greater than £1m reported an average rise of just 3%.

Just under half of respondents (47%) said that their average charge-out rates have increased in the last two years, with only one in 10 having decreased rates.

Some rather strange news came out of San Francisco this week. Apparently people are more likely to click on a Facebook or Twitter ad if it contains a picture of a man’s crotch.

The data comes from betabrand.com, which found that on Facebook the special ingredient led to 64% more engagement, 60% more on-site email sign ups, 30% more clicks to the dollar and 20% more purchases.

On Twitter it drive four times more purchases and 1.5x the number of retweets.

So there you have it… 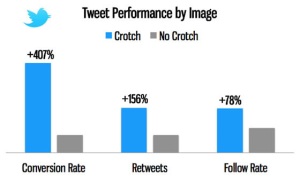 Are win-back emails any use?

Win-back email campaigns appear to have limited impact in re-engaging old customers, according to a report by Return Path.

Data taken from the 33 retailers that conducted win-back campaigns shows that the average read rate was just 12%.

However it appears that there may be a positive knock-on effect in that 45% of recipients who received win-back emails then read subsequent marketing email from that brand, even though only a quarter of them (24%) engaged with the initial win-back message. 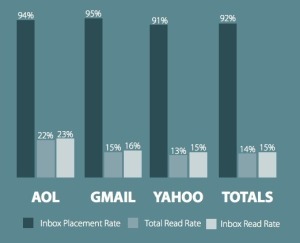 There’s no such thing as loyalty in the smartphone market these days apparently, with new research showing that a majority of both Samsung and iPhone users across the country are unlikely to upgrade to their existing brand’s next flagship device.

The findings come from a Qriously survey of more than 2,400 people.

It found that 80% of pinners are women, and that 84% of women are still pinning in their fourth year of membership.

Men however drop off sharply to 55% in the second year and 50% by the fourth. 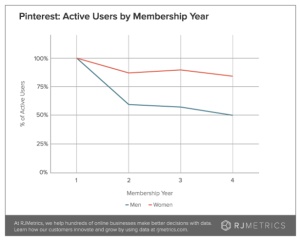